skip to main | skip to sidebar

On definitions of Catholic factions

Recently in many online discussions I have seen that people use many different definitions for different points of view or currents within the Catholic Church. In order to bring a bit more structure into these discussions and because there seems to be a polarisation of opinions within the Catholic Church during the pontificate of Pope Francis, I though it useful to propose definitions for the different factions or currents of thinking.

In fact, one can pose two questions which divide the opinions within the Church in the 21st century into four groups, depending on whether these questions are answered with a “yes” or a “no”. Here are the two questions:

1)                    Was the Second Vatican Council as expressed in all its documents a hermeneutic rupture with the tradition and the magisterium (teaching) of the Catholic Church?

2)                  Are the reforms that followed the Second Vatican Council especially the liturgy reform a negative development that weakened the Church? 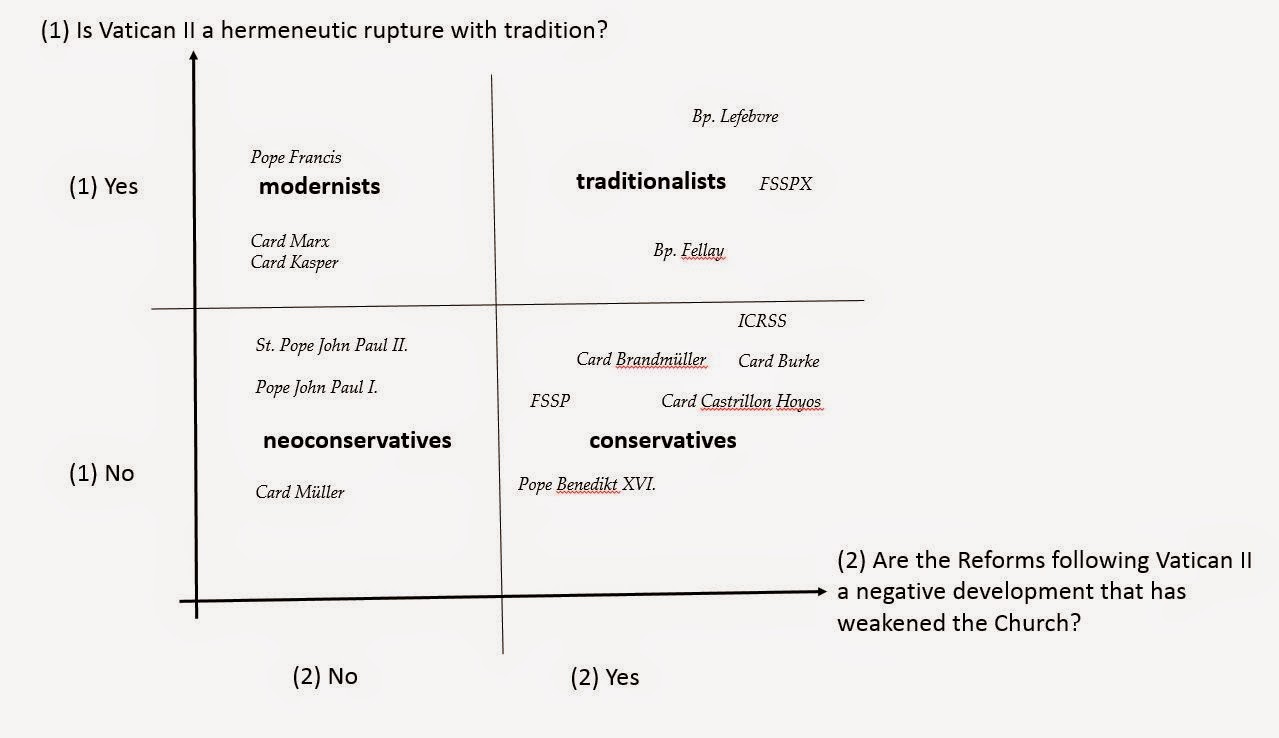 Those who negate both statements are best called “neoconservatives”. They believe the Vatican II to be in hermeneutic continuity with tradition and they believe the reforms of the Vatican council to be a positive development, especially the liturgy reform. Prominent representatives of this position are Bl. Pope Paul VI., Pope John Paul I, Saint John Paul II. and Cardinal Mueller the current prefect of the congregation for the doctrine of the faith. The neoconservatives tend to hold to moral positions as defined in the 1990 catechism of John Paul II. and do not want a further change to these positions. They are not fond of the old form of the liturgy and will tolerate it at best but do not wish for the old liturgy to be celebrated more widely.

Those who negate the second statement but not the first are best called “liberals” or “modernists”.  This means they believe that exactly because Vatican II was a break with tradition the reforms that followed the council were positive and the even more reforms need to follow. This group of modernists often invokes the “spirit of the council” an unclear concept that spurs on to further thinking about reform of the Church and of its rituals. In this group belong the current Pope Francis as well as Cardinal Kasper and some of the 8 chosen advisors of the current Pope, for instance Cardinal Marx of Munich.

Those who negate the first but not the second statement are best called “Conservatives”. They believe the council is in continuity with tradition but they also believe that some of the reforms following the council where an over-interpretation of the intention of the council. The conservatives believe that the old form of the liturgy needs to be more widely celebrated also as an inspiration for the new form of the liturgy. They believe in a "reform of the reform” of the liturgy to create a liturgy more in keeping with the tradition of the Church. Prominent exponents of this position are the Pope emeritus, Benedikt XVI. , Cardinals Burke, Brandmueller, Castrillon-Hoyos as well as the Institute of Christ the King (ICRSS) and the Society of St. Peter (FSSP).

Those who affirm both statements are best called “traditionalists”. They believe that Vatican II. was a rupture with tradition and the reform following it were a negative development that weakened the Church and the faith. They will on occasion question whether the new form of the Mass and sacraments are actually valid. They do however except the primacy of the Pope and hence are not sedevacantists. The most prominent exponents of this position are Archbishop Lefebvre, the founder of the Society of St. Pius X., the society of St. Pius X. itself as well as its current superior general, Bishop Fellay.